Responding to Fear With Love 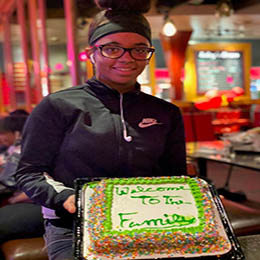 While Alicia was placed with her foster family, her initial permanency planning goal was return to home; however, it changed to adoption. When the foster family learned about the change of adoption, they were very eager to start the adoption process with Alicia. Alicia has grown so much in her behavior, personality, and life skills, from when she was first placed with her family. When she arrived in their home, she arrived with a lot of hurt and disappointments. She was very angry, defiant, and didn’t trust anyone including her caseworker. She was scared to open herself up and attach to anyone or anything because she didn’t want to get hurt again. Alicia felt as though everyone would give up on her, as others has done in the past. As her caseworker, I assisted the family with trying to understand Alicia’s world. I encouraged Alicia to develop healthier coping skills and to try to replace her negative behavior with good behavior. In addition, we also had to teach Alicia manners and about disagreeing respectfully.

The family has taken a lot of time and has shown consistency to assist with Alicia’s change. They responded to Alicia’s fear with love. Overtime, Alicia learned to trust her family as they developed their bonds. Alicia considers herself being a big sister in the home and she takes her role very serious to show her young siblings how to behave and be good and respectful.

During the pandemic, Zoom conferences were used to maintain a connection and check in with Alicia. Creative activities tailored to Alicia’s age were conducted via telehealth to maintain the connection. In each session, Alicia was engaged and very open to sharing her song writings and journal entries.