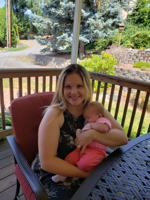 Parents aiming to regain custody of their children face both personal and legal challenges that are even harder for newcomers to the child welfare system. Having navigated the system firsthand, Children's Home Society of Washington’s Alise draws from her experience to help others.

In 2009, Alise was addicted to methamphetamines and facing a 7-year prison sentence when her infant daughter, Rebekah, was placed in foster care. Facing a crossroads, Alise was offered a unique opportunity to turn her life around with the option of treatment instead of incarceration.

After completing an in-patient program, Alise was reunited with her daughter in the spring of 2010. She later served as a program lead for the King County Parents for Parents program and later was responsible for leading statewide and national advocacy efforts for Children's Home Society of Washington.

In 2019, Alise became the director of Family Resilience Strategies for Children's Home Society of Washington and is working to expand the Parents for Parents program across Washington State. She is also developing a national plan for outreach to families in need of concrete support from parents who have been in their shoes. In addition to her professional role changes, Alise became the mother of a baby girl in May 2019.

Alise experienced what it was like to have a community of love and support around her as she walked out of the hospital with baby Mia. “My dream is for families to not be written off and instead provided guidance and love to ensure their next generation has the best opportunity for a positive path,” Alise said. “Change is possible.”

Alise says she’s living proof that families can heal with guidance and assistance. Rebekah is excelling, and Alise has been recognized for a number of State and national awards, including Casey Family Programs’ 2018 Excellence for Children Award, the 2017 Washington State Department of Early Learning Unsung Hero Award, and the American Bar Association's 2012 National Hero Award for Reunification and Child Welfare.

“There’s not a doubt in my mind that I wasn’t meant to raise these amazing children,” she said. “Ending every single night with them in my arms makes me even more passionate about helping families on their own journey.”